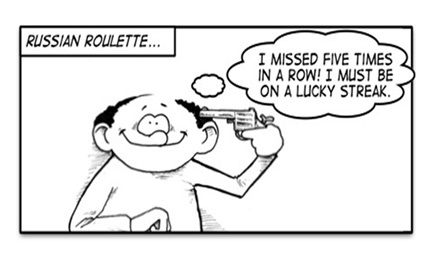 Perhaps rewrite these to all start with a short story, even true ones if public knowledge?

E.g. GOAL, an Irish NGO, had been working in Darfur for over twenty years without a security incident. Because of this, the President said that this meant that it was unlikely that anything would happen in the future (I can get the exact quote). This was despite increasing evidence that the situation was becoming less secure. In the end, two women were kidnapped.
This is a classic cognitive bias where the situation requires more rational cognition that realying on instinctive, subconscious decision making.

Properly known as ‘the fallacy of the maturity of chances’, this bias describes how people assume that random events somehow form a pattern leading to non-random likelihood in the future. A classic example is the case where someone flips a coin ten times in a row, each time resulting in ‘heads’. Many people assume that there is now a greater chance that the next toss will result in ‘tails’. Which isn’t true – the chance is 50/50 no matter how many times it has been tossed (assuming a fair toss).

This is a common, yet very dangerous, bias for people in the field. All too often, agencies